How Will Agriculture Fare With Political Change

When it comes to candid analysis of politics and agriculture, few are as popular or as outspoken as Barry Flinchbaugh, Kansas State Economist. He sees the election of Paul Ryan as Speaker of the House as being good for agriculture, “Overall, Ryan has a mixed record on agriculture. He is supportive of the TPP trade agreement, but he is not a fan of farm payments. Being from Wisconsin, he is careful when it comes to dairy policy.” Generally, Flinchbaugh sees little change in the way House leadership will act, “It is not like he is on the far right, I think he will be a lot like John Boehner.” Flinchbaugh added that Ryan will have a lot more political power since he did not have to make any promises in order to get the job.

Most major farm groups issued statements in support of Ryan’s election. The American Farm Bureau Federation said, “We have repeatedly called for pragmatism and bipartisan cooperation in Washington, and our new Speaker has a record of delivering just those things. We look forward to working closely with the Speaker and his leadership team to move the policy and fiscal reforms important to agriculture forward.” NCGA said, “We congratulate Speaker Ryan on his election and wish him the best of luck. In his speech today, Speaker Ryan called the House ‘broken’ and urged his colleagues to come together, re-establish order, and find unity and common ground. We hope Congress will heed the advice of their new leader. It’s time to get back on the path of doing the people’s business.” 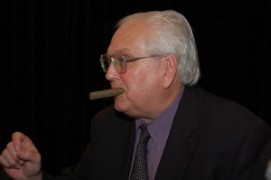 When it comes to leading presidential candidates, Flinchbaugh minces no words about some the GOP candidates and their views on agriculture, “Trump and Carson would not know a bull from a steer, you would have to explain it to them. John Kasich knows the most about agriculture.”

Flinchbaugh said Hilary Clinton had a good record of supporting agriculture, “Then she changed her mind and opposed the TPP trade agreement. This was caving to political pressure from the left wing nuts. After this cave in, she is going to have to crawl her way back.” He added that Bill Clinton was one of the strongest supporters of trade we have had in the White House, and he speculates Bill may be able to talk some sense into his wife before the election.