Crude pressure continues on the anticipation of lifting of Iran’s sanctions allowing for more global supply of Iranian oil supplies.

Monday the markets will be closed for the Martin Luther King holiday observation.

Corn finishes the week on its highs after the USDA report disappoints the bears. Fund position reported with new record net short.

Commitment of Traders report this afternoon showed that as of Tuesday this week – which includes price action from the day of the USDA report – Managed Money Futures + Options combined now have a record short net position of -186,831. Adding nearly -25k short positions over the previous week.

The balance of the week following the USDA report was generally supported by short covering but not convincingly so until today’s finish going into the holiday weekend. Funds were reported buyers of 8,000 contracts.

March corn gained 6 ¼ for the week and brought price back above a long-term trendline. Upside resistance for March this coming week will be found in the 3.65-3.70 area.

Commitment of traders showed Managed Money lightened their short position in beans by 26,507 contracts, leaving their net short position at -53,040 for combined futures and options as of the end of last Tuesday.

March soybeans gained 13 ¾ for the week following the reduction in soybean ending stocks to below trade expectations. Board crush margin continues to suffer as soybeans gain on meal. Upside resistance for March soybeans will be 8.95-9.00 area.

Wheat recovers, reducing losses of previous two days ahead of long weekend. Loses 4 ¾ for the week.

Wheat was able to find support on short covering ahead of the long weekend in the face of continued weakness in European wheat futures and weak energy markets.

Commitment of Traders report showed Managed Money had lighted their short position in Chicago by 25k contracts, leaving their combined futures and options position at a net short of -71,128.

Wheat continues its sideways to lower trend, but today’s action showed at least some reluctance of fresh selling ahead of the long weekend. For now, 5.00 March Chicago should prove to be selling resistance.

Kansas City closed as a slight premium to Chicago in the March contract – the first time since October.

The CDC stated that the bird flu strain recently found in Indiana has no evidence linking it to human infections but they are working on a plan to monitor locals exposed to the strain. The Ukraine gov’t has moved to halt imports of poultry from the state of Indiana.

Next Friday, the 22nd, the USDA will release their monthly cattle on feed report and monthly cold storage data.

Futures were weak today looking ahead to next week’s shortened trade and mixed wholesale beef values and this week’s cash prices that didn’t meet expectations. This week cash cattle in the Plains moved at $132 to $134 per cwt compared to $131 to $133 last week. 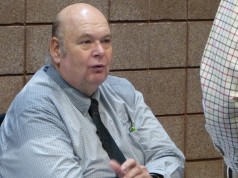