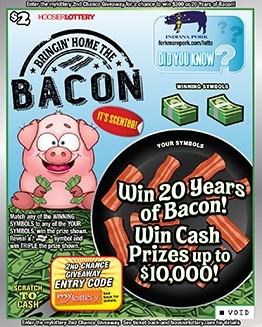 The Hoosier Lottery is partnering with Indiana Pork to bring Hoosiers a one-of-a-kind new bacon-scented Lottery ticket with a unique prize offering.    The game, a Scratch-off ticket called Bringin’ Home the Bacon, is available June 2 at more than 4,400 Hoosier Lottery retailers. Tickets are $2 each and feature instant prizes up to $10,000, along with unique Indiana Pork trivia.

In addition to cash prizes, Bringin’ Home the Bacon offers another exciting prize. Five lucky players can win a “bacon annuity,” a 20-year-supply of bacon, paid in installments and valued at $5,000 or $250 annually.  Four bacon prizes can be instantly won  on the Scratch-off, and one final bacon prize will be awarded through a second chance drawing in late September. An additional 60 prizes of $200 will be awarded in second-chance drawings held in the months of  June, July, August and September. To enter, players simply need to visit www.hoosierlottery.com/bacon, register  for a FREE mylottery account and enter their non-winning Bringin’ Home the Bacon tickets into the second chance promotion.

It’s the summer of bacon!

Catch the Bacon Brothers, with the real Kevin Bacon, as a VIP with the Hoosier Lottery at Fair Oaks Farm’s Sizzling Day of Bacon June 28 in Schererville.

In conjunction with Indiana Pork, Hoosier Lottery street teams will host bacon tastings in Indianapolis, Fort Wayne and Evansville in June and July and will give away bacon-themed prizes at retail events around the state. The statewide bacon-blitz culminates in Lotto Town at the Indiana State Fair in August. Visit www.hoosierlottery.com/bacon for event details.

A Side Order of Bacon