Mark and Christine York’s contract pork operation in Wabash County is not only a success financially, but also a success with community relations. The Yorks produce over 35,000 market hogs per year. “We like to think of it as how many pounds of pork we produce, and how many people we feed,” Mark says. “We’ve calculated that we provide pork to meet annual needs of 135,000 people each year.”

Despite being a large operation, they have good relations with their neighbors and community. “When it comes to community outreach, we have to more than a normal business would do,” he says. “Pork production comes with some odor, so we have to do extra things with our neighbors and our community.”

Mark told HAT this was part of their plan from the beginning and figured into how they built and expanded their operation, “Like setting our buildings a half mile off the road, backing them up against woods and planting trees. That is what is going to separate our family-run operation and sustain us into the future.”

While some operations have found themselves involved in lawsuits and the target of local activist groups, the Yorks go out of their way to make sure their operation is seen as a community asset. One way is participating in the Farmers Who Care program in Wabash County, donating pork to local food banks and shelters. “We have donated over 10,000 pounds of pork over the past 4 years, and that has provided meals for about 40,000 people,” Mark states. Both Mark and Christine share that message when they participate in programs such as Ag in the Classroom and Tell Our Story, sponsored by Indiana Farm Bureau and Wabash County Farm Bureau.

“We also emphasize that we try to be as environmentally friendly as possible,” Mark says. “We have a responsibility to be good neighbors and promoters for agriculture, and we do our best to fulfill those roles.” Mark served on the Indiana Pork board of directors beginning in 2005 and was president in 2010; and president of Wabash County Farm Bureau. Both were named first Wabash County Farm Family of the Year by the local chamber of commerce in 2010; Indiana Certified Livestock Producers in 2006; part of IFB Tell Our Story program at the 2017 Indiana State Fair; and are heavily involved in local Farmers Who Care program which supports local food banks The Yorks are not only respected by their community, but were recently honored by their colleagues with the Master Farmer award. 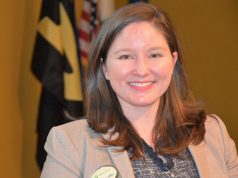 It Might be Time to Check Your Corn-Soybean Planting Strategy