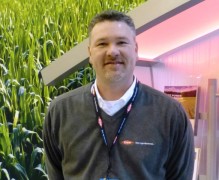 In the drive for a profitable year in 2016 amid depressed commodity prices, where are farmers able to trim on inputs? One product manager says it doesn’t appear that weed control is getting cut out, and that’s a good thing.

“One thing that we’ve seen as commodity prices get a little pressure on them you would expect that growers would tighten up the purse a little bit,” says Luke Peters, U.S. Corn Herbicides product manager for Dow AgroSciences, “but they’re still spending money to control these high anxiety weeds. We know it’s an issue. The glyphosate resistance, the herbicide resistance is top of mind so they’re continuing to invest in it. They’re looking for products that are going to do a better job.”

Staying with a weed control program is a key to success but he says farmers now need multiple modes of action.

“That’s our biggest defense and biggest prevention of future herbicide resistant weeds. Palmer amaranth, marestail, waterhemp is a big one these days, and giant ragweed obviously in Indiana.”

For companies like Dow, research and development efforts are continuing the search for new modes of action to add to the weed control mix, and Dow AgroSciences has brought its new Resicore corn herbicide to farmers this year. Peters says it offers something new to the marketplace.

“We really excited about Resicore. We’ve been looking for a new residual corn herbicide to add to our lineup. Resicore brings that with a formulation of 3 active ingredients we haven’t seen together before, and we’re looking forward to seeing it in action this spring.”

Peters added, “With this product we’re looking for powerful residual that stretches its control deep into the growing season and something a grower can put on early but still has the flexibility to go on early post. And we’ve seen excellent results in our trials and university trials last year.”

Peters says there is limited availability of Resicore this spring with full availability in 2017. But he added a lot of farmers will be putting it on their corn acres this spring. Learn more at www.poweroverweeds.com.