Dr. Cathann Kress is the new dean of the College of Food, Agricultural and Environmental Sciences at Ohio State University. She beings May 1, 2017. One thing she positively plans to continue is OSU’s co-operative working relationship with Purdue.

“I know the people at Purdue very well, the Extension Director Jason Henderson, Renee McKee who is with their 4-H program, know them all well and have great respect for their work. And the more collaborations and partnerships we have across the land grant university system and extension I think the greater benefit for the people who live in our state,” Kress said.

Dean of the Purdue College of Agriculture Dr. Jay Akridge knows her well via the Association of Public and Land Grant Universities.

“She just is wrapping up a term leading the ag deans group for that organization, and she’s an outstanding leader, a well-respected leader and someone we’re really looking forward to working with in her new role at Ohio State,” he said.

Throughout the system land grants are striving to make the most of their resources. Akridge told HAT that’s one main reason the Purdue-Ohio State connection is so important. 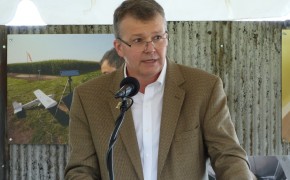 “We all have to think about where we have strengths and where we can partner with our neighboring states, and certainly that’s been the case with Ohio State,” he explained. “We’ve got a great partnership around the Farm Science Review. The Tri State Dairy program is another collaborative activity that we pursue with them and Michigan State. I think the proximity is obviously important. The fact that agriculture has got some similarities in both states, and it’s just been a nice working relationship over time with Bruce McFerrin before Cathann, and Cathann is coming from a terrific land grant. She knows the lay of the land, and I’m very confident that we’ll find some new ways to work together.”

He says the relationship between the two universities has evolved over time.
“I think for all land grants the days of being everything for everybody, the resources won’t support that anymore and it’s not the best use of public funds.”

Kress is preparing to leave her current position as vice president for extension and outreach and director of cooperative extension at Iowa State University. She also served as a senior policy analyst of Military Community and Family Policy at the Department of Defense in Washington, D.C. She was director of youth development at the National 4-H Headquarters, U.S. Department of Agriculture, also in Washington, D.C. and was assistant director, Cornell Cooperative Extension, and state program leader at Cornell University, Ithaca, New York.