Light snow develops over parts of the state today as a minor disturbance slides through. Scattered snow showers push into central Indiana, up to US 24 later this morning into midday, and then drift south through the rest of the afternoon and early evening. Snow winds down near sunset, and we should start to see some breaks in the clouds closer to midnight. All told today, we are looking for a coating to an inch from US 24 south to the KY line. We won’t rule out a few flurries north of 24 and a dusting in spots, but generally this is a central and southern Indiana snow event.  The map shows snow potential into this evening.

We kick off a dry forecast pattern on Friday. We should stay precipitation free over almost all of the state from Friday through next Wednesday night. The only exception will be the second half of the weekend in far, far, far southern Indiana. We do have a significant storm complex exiting the central plains Saturday and moving across the Deep south. While we think that most of the precipitation will stay south of the Ohio river, clouds likely do slip north into southern Indiana, and we won’t rule out some precipitation from Sunday morning through early Monday morning just north of the river, particularly in SW Indiana. The rest of us see nothing there, and in fact see a nice mix of sun and clouds. This will be the longest dry stretch we will have seen in quite some time.

Light snow moves back into the region next Thursday, bringing a coating to 2 inches to 70% of the state. A second wave of action hits on Friday, but we have significantly lower concern about heavy moisture availability. Instead, we look for an additional coating to 2” on Friday with 80% coverage. Winds do look to be a problem. We can expect 20-40 mph winds statewide on Friday coming out of the north on the backside of a powerful low lifting through eastern Ohio and western PA. The timing of the winds will be important, because if we have snow flying in that time frame, it will look very nasty and we could see some dangerous conditions. But there is plenty of time to hone in on this event going forward. Precipitation looks to be all rain at this time, and we dodge the worst…that falls over eastern Ohio.

For the extended period, we continue to see an active 6 day stretch. Rains arrive on the 17th and linger into early the 18th, bringing .1”-.5” totals, mostly over the southern half of the state. Then we have another frontal complex arriving for the 20th. This one has rain potential of .25”-.75” with 80% coverage of the state south of US 30. Notice we continue to talk rain! While the nearby 10 window looks cold, particularly with a reinforcing shot of cold air this weekend, the 11-16 day period warms considerably, and we expect well above normal temps all the way through the 22nd. This will allow all precipitation in that extended forecast to stay liquid. This cold, dry stretch looks to us to be the best opportunity to finish up the late harvest and may be the best chance of the rest of 2018. 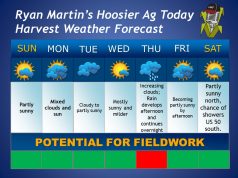 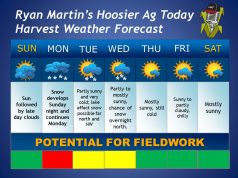